Your lessons have taught me to introduce the Constitution and Declaration in hands-on, interesting ways to my students. They learn and have fun at the same time.
—Teacher, Pasadena Unified School District

Your publications are wonderful, I consider them among the finest historical publications I receive, they enhance and deepen my own understanding. Thank you again for your consistently polished products.
— Chris H., Teacher

Bill of Rights in Action

Bill of Rights in Action

Login to Download the latest edition of Bill of Rights in Action. 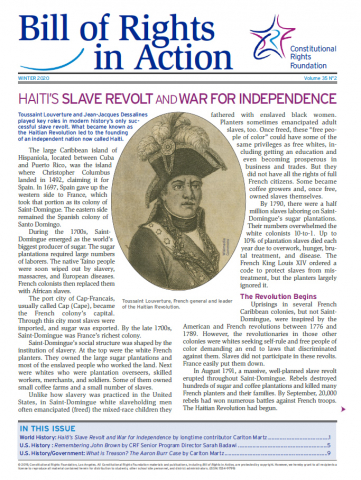 Classroom-ready lessons on issues of the day!

The Challenge of Democracy

Governance
In a democratic society such as ours, every citizen is entrusted with rights and responsibilities. The citizenry is the source of political power and must be well-educated to effectively take part in civic life. Topics include constitutional democracy, the electoral college, the two-party system, the amendment process, the role of the judiciary, and the question of whether or not democracy is in decline.

Violence
While there are many forms of violence with which U.S. society has grappled in its history and will continue to confront in the future, the lessons in this series focus primarily on criminal violence, along with issues and policies related to it. Topics include a historical survey of violence in the U.S., debates over gun control policy, the constitutionality of gang ordinances, criminal-justice reform proposals, hate crimes, and more.

Information
Freedom of the press is a fundamental right in the First Amendment, for the press is an essential government watchdog. Today, the press can provide us with a virtually non-stop flow of information, and we have the means of sharing it widely with just our fingertips. What’s the role of the free press? And how can we be responsible consumers ― and sharers ― of news and information? Topics include fake news, defamation, propaganda, conspiracy theories, the limits on a free press, and the people’s right to know government information.

Diversity
The story of the United States is the story of its diverse peoples. And the history of interactions among them has been, at turns, both devastating and hopeful. The lessons in this series provide teachers and students the opportunities to explore and critically engage with historical issues related to diversity, as well as contemporary questions that will shape the future for all people in the United States. Topics include confronting the slave ownership of the Founding Fathers, exploring reparations for slavery, evaluating how we measure diversity with the census, understanding current debates over affirmative in college admissions, and more.

The Challenge of Democracy resources are made possible by a generous grant from the W.M. Keck Foundation.

Civil Conversation engages students in close reading and analysis of a text that presents two sides of an issue. Students then participate in a structured small-group discussion about the issue, using evidence from the text. Finally, students reflect on their participation in the conversation, with an emphasis on reaching their own informed conclusions and considering where they found common ground with their classmates. It is intentionally not a debate, but a chance for students to engage in thoughtful dialogue. Lessons available for U.S. history, world history, government/economics, and current events.

Curriculum Library for NYC DOE Civics for All Initiative

Civic role plays and simulations require students to examine an issue from an assigned perspective. These activities provide a unique opportunity for students to examine content through a specific lens, to recognize bias, and ultimately, to draw evidence- and text-based conclusions in ways that are engaging and meaningful. Lessons available for U.S. history, world history, government/economics, and current events.

Curriculum Library for NYC DOE Civics for All Initiative

Civic Action Project (CAP) is a free project-based learning program for civics and government. Available for middle and high school.

Foundations of Our Constitution

Lessons designed to help students explore documents that serve as the foundation for American democracy. Each lesson consists of three components: (1) a reading with discussion questions, (2) an interactive activity, and (3) the complete text of the document that the lesson explores.

This project is funded by the Bill & Melinda Gates Foundation as part of a multi-network effort to support teachers as they implement the Common Core State Standards in their classrooms. With this grant, CRF will work with social studies teachers around the nation to share proven instructional practices and research concerning the Common Core in order to help prepare students to become informed, skilled, and engaged citizens by increasing their capacity to research, think critically, and draw evidence-based conclusions.

CRF publications provide educational tools to help you create a dynamic, interactive learning environment in the classroom in the areas of Law and Government, Civic Participation, and U.S. and World History.