If they looked behind them, there was the mighty ocean which they had passed…to separate them from all the civil parts of the world. 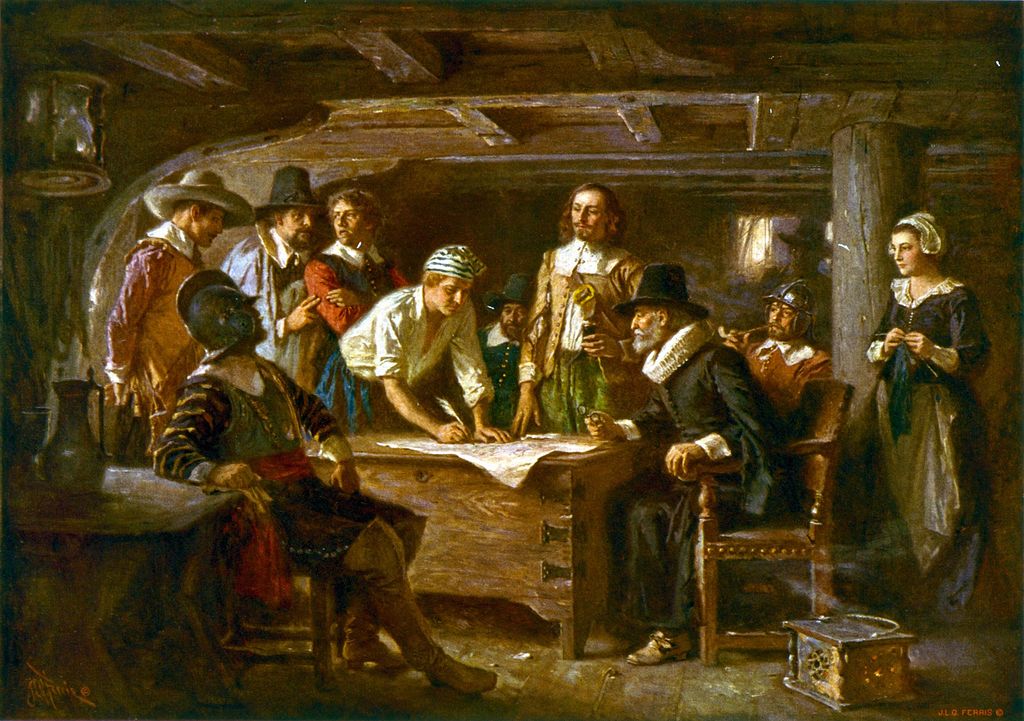 The 102 passengers on the Mayflower were divided into two groups. Only 41 of them were Pilgrims--religious dissenters called Separatists, who had fled England for Holland. Now they sought a new life in America where they could practice their religion in the manner they chose. The rest of the passengers, called "strangers" by the Pilgrims, included merchants, craftsmen, skilled workers and indentured servants, and several young orphans. All were common people. About one-third of them were children.

The Pilgrims had organized the voyage. William Brewster and the other Pilgrim leaders had secured the right to settle on land claimed by the Virginia Company near the mouth of the Hudson River. To raise money for the voyage the Pilgrims signed a contract with a group of London stockholders. In return the stockholders would share in the profits of the planned colony. The Pilgrims had rounded up the "strangers" to increase the chances of success for their enterprise.

The 3,000-mile voyage across the Atlantic lasted more than two months. When they finally sighted land on November 9, 1620, the captain of the Mayflower knew right away that they were at Cape Cod, far north of their destination. The captain headed the Mayflower southward, but dangerous sand bars and heavy seas forced them to turn back. The Mayflower finally dropped anchor in a harbor at the tip of Cape Cod. Rather than chancing more days at sea, the Pilgrims decided to land.

Almost immediately, an argument broke out. According to William Bradford (who later wrote an account of the Pilgrims' experiences) several "strangers" made "discontented and mutinous speeches." They apparently argued that, since the Cape Cod area was outside the jurisdiction of the Virginia Company, its rules and regulations no longer applied. The troublemakers threatened to do as they pleased "for none had power to command them," wrote William Bradford. Three thousand miles from home, a real crisis faced the colonists even before they stepped ashore.

Imagine the situation: over 100 people, cut off from any government, with a rebellion brewing. Only staunch determination would help the Pilgrims land and establish their colony. If they didn't work as a group, they could all die in the wilderness.

The Pilgrim leaders realized that they needed a temporary government authority. Back home, such authority came from the king. Isolated as they were in America, it could only come from the people themselves. Aboard the Mayflower, by necessity, the Pilgrims and "Strangers" made a written agreement or compact among themselves.

The Mayflower Compact was probably composed by William Brewster, who had a university education, and was signed by nearly all the adult male colonists, including two of the indentured servants. The format of the Mayflower Compact is very similar to the written agreements used by the Pilgrims to establish their Separatist churches in England and Holland. Under these agreements the male adult members of each church decided how to worship God. They also elected their own ministers and other church officers. This pattern of church self-government served as a model for political self-government in the Mayflower Compact.

The colonists had no intention of declaring their independence from England when they signed the Mayflower Compact. In the opening line of the Compact, both Pilgrims and "Strangers" refer to themselves as "loyal subjects" of King James. The rest of the Mayflower Compact is very short. It simply bound the signers into a "Civil Body Politic" for the purpose of passing "just and equal Laws . . . for the general good of the Colony." But those few words expressed the idea of self-government for the first time in the New World.

Immediately after agreeing to the Mayflower Compact, the signers elected John Carver (one of the Pilgrim leaders) as governor of their colony. They called it Plymouth Plantation. When Governor Carver died in less than a year, William Bradford, age 31, replaced him. Each year thereafter the "Civil Body Politic," consisting of all adult males except indentured servants, assembled to elect the governor and a small number of assistants. Bradford was re-elected 30 times between 1621 and 1656.

In the early years Governor Bradford pretty much decided how the colony should be run. Few objected to his one-man rule. As the colony's population grew due to immigration, several new towns came into existence. The roving and increasingly scattered population found it difficult to attend the General Court, as the governing meetings at Plymouth came to be called. By 1639, deputies were sent to represent each town at the other General Court sessions. Not only self-rule, but representative government had taken root on American soil.

The English Magna Carta, written more than 400 years before the Mayflower Compact, established the principle of the rule of law. In England this still mostly meant the king's law. The Mayflower Compact continued the idea of law made by the people. This idea lies at the heart of democracy.

From its crude beginning in Plymouth, self-government evolved into the town meetings of New England and larger local governments in colonial America. By the time of the Constitutional Convention, the Mayflower Compact had been nearly forgotten, but the powerful idea of self-government had not. Born out of necessity on the Mayflower, the Compact made a significant contribution to the creation of a new democratic nation.

The complete text of the Mayflower Compact

The year is 2120, and the American spaceship Mayflower II has landed on Mars, exactly 400 years after the first Mayflower reached the New World. Aboard the Mayflower II are a team of scientists and a larger group of skilled workers.
The mission of this voyage is to construct a research base on Mars for scientific observations and experiments. Unfortunately, due to a malfunction, the Mayflower II crash-landed in an area outside that designated for U.S. exploration by a United Nations treaty. This territory is not within the jurisdiction of any Earth nation.

Although the crash disabled the Mayflower II and its radio, all personnel as well as the supplies and life support systems survived intact. The scientists and workers will be able to live in the Mayflower II and build structures outside the spacecraft. They expect a rescue ship will be sent, but not for many months.

Shortly after the Mayflower II crashed, an argument broke out between the scientists and workers. The workers claimed that the whole purpose of the project had changed from scientific research to survival. Since the workers know how to build a survival base, they can take care of themselves. The workers also pointed out that because they are in an area of Mars outside the jurisdiction of the United States, they are not bound to obey the orders of the scientists (or any laws for that matter).

The scientists rejected these views, and argued that they had been put in charge of the project back on Earth and therefore should remain in control until the rescue ship arrives. They also reminded the workers that their superior education and training as scientists make them the logical ones to lead the group in this alien environment.

After wrangling over these matters for a while, the scientists and the workers finally agreed to work out a written compact that would provide the basis for a government until the relief ship appears.

Procedure
1. Imagine your class is the group of men and women stranded on Mars.

2. Separate the class into two groups:

3. Hold a meeting where you discuss and vote on an answer to each of the following questions:

4. After discussing and voting on answers to the questions, write up the results in a Mayflower II Compact.

5. Take a final vote. Decide whether approval of the compact should require unanimous agreement, a two-thirds majority or a simple majority. After voting on the Mayflower II Compact, all those agreeing should sign it.