Wartime and the Bill of Rights: The Korematsu Case

During World War II, the U.S. government ordered 120,000 persons of Japanese ancestry into prison camps. Fred Korematsu, an American citizen of Japanese descent, refused to go, and his case went before the Supreme Court.

The Issei met a lot of official racial discrimination. Federal law prohibited the Issei from ever becoming naturalized U.S. citizens. California, where most of the Issei lived, made it illegal for them to own agricultural land.  In 1924, the federal government placed a ban on all Japanese immigration.

The Issei's children who were born in the United States automatically became American citizens. Called Nisei, the second generation, they quickly became Americanized. They attended public schools, spoke English, attended college, worked in many occupations, and voted in elections. The Nisei thought of themselves as Americans, not Japanese.

In 1940, 127,000 persons of Japanese ancestry lived in the United States, mostly in California. Sixty-three percent of them were Nisei, American-born citizens. Despite discrimination, the Issei and Nisei had built thriving ethnic communities in California and the West Coast. Then Japan attacked Pearl Harbor.

In the months following the attack on Pearl Harbor, pressure mounted from politicians on the West Coast. They demanded that "something be done" about the Issei and Nisei living there. Rumors spread about Japanese Americans preparing to aid a Japanese invasion of the United States. But when the Army and FBI investigated these rumors, they found them to be false.

General John L. DeWitt was responsible for the defense of the West Coast. Without any real evidence, he believed that people of Japanese ancestry, citizens and non-citizens alike, could not be trusted. He said that the lack of any sabotage on the West Coast only proved that they were waiting for the Japanese invasion to begin.

Working with others in the War Department, General DeWitt developed a plan to remove all the Issei and Nisei from their homes in the Western states and lock them in prison camps. The Justice Department, FBI, and Army intelligence all concluded that such a drastic action was not necessary. President Franklin D. Roosevelt, however, accepted General DeWitt's recommendation.

On February 19, 1942, President Roosevelt issued Executive Order 9066. This gave General DeWitt authority to order the mass evacuation of Issei and Nisei from the West Coast and other military areas. This order affected about 120,000 citizens and non-citizens of Japanese origin. The stated purpose of removing this entire ethnic group was for "protection against espionage and against sabotage." Congress made it a crime to refuse to leave a military area when ordered to do so.

Starting on March 2, 1942, General DeWitt issued orders requiring all persons of Japanese ancestry in eight Western states to report to temporary assembly centers. When they reported, the government transported them to permanent "relocation centers," the guarded prison camps where they would remain for up to four years.

When ordered to evacuate, Issei and Nisei families usually had only a few days to sell their homes, businesses, vehicles, and other property. Even so, almost all cooperated with General DeWitt's orders, believing that by doing so they proved their loyalty.

Although more than 60 percent of those ordered to evacuate were U.S. citizens, none had a hearing or trial before the government locked them up in relocation camps. Once in the camps, however, the government asked them to sign a loyalty oath to the United States. Most did, but about 4 percent refused, protesting how they had been treated. The government classified these individuals as "disloyal." 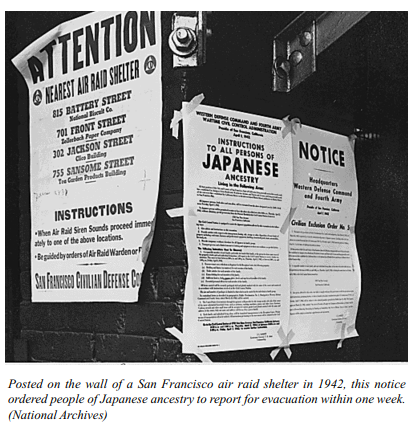 Born of Issei immigrant parents in Oakland, California, Fred Korematsu was a Nisei and an American citizen. He was 22-years-old in 1942 when General DeWitt ordered everyone of Japanese ancestry in the Western United States to report to assembly centers. But Korematsu was in love with an Italian-American girl and decided he did not want to leave his home near Oakland.

After refusing to report for internment, Korematsu changed his name and even underwent eyelid surgery to make him look less Japanese. On May 30, 1942, however, government authorities finally tracked him down. They arrested him for remaining in a military area barred to anyone of Japanese ancestry.

After his conviction in a federal court, the judge sentenced Korematsu to five years probation. The military immediately took him into custody, however, and sent him to the relocation camp at Topaz, Utah. The American Civil Liberties Union (ACLU) persuaded Korematsu to appeal his case.

When Korematsu's case reached the Supreme Court in October 1944, the attorneys for the government pointed to the constitutional war powers of Congress and the president. The government argued that the military must take all steps necessary to wage war successfully. In the view of President Roosevelt, the War Department, and General DeWitt, the internment of all Japanese Issei and Nisei was a "military necessity."

The government attorneys further argued that there was not enough time to hold hearings or trials to determine who was and was not loyal. The attorneys presented a report from General DeWitt, who repeated many of the unproved rumors about Issei and Nisei disloyalty. The government also cited those in the camps who had refused to sign the loyalty oath.

Attorneys for the American Civil Liberties Union and the Japanese American Citizens League represented Korematsu. They argued that there was no military necessity for removing and imprisoning all persons of Japanese ancestry without a hearing or trial.

Korematsu's attorneys showed that during the nearly four months between Pearl Harbor and General DeWitt's first evacuation order, not one person of Japanese descent had been convicted of espionage or sabotage. The attorneys stated that instead of uprooting 120,000 men, women, and children from their homes, the government simply could have barred them from specific military and industrial sites.

If military necessity was not the reason for the evacuations and imprisonments, as Korematsu's lawyers argued, what was? They charged that General DeWitt accepted the prejudiced views of those hostile to the Issei and Nisei and was himself a racist. To prove their point, they quoted a statement DeWitt made before a congressional committee in 1943:

A Jap's a Jap. It makes no difference whether he is an American citizen or not. I don't want any of them . . . . They are a dangerous element, whether loyal or not . . . .

On December 18, 1944, the Supreme Court decided, 6-3, to uphold the conviction of Korematsu. The majority ruled only on his refusal to leave a prohibited military area and did not consider the constitutionality of the relocation camps. Justice Hugo Black, writing for the majority, fully accepted the views of General DeWitt. Justice Black also said that Korematsu had not been forced from his home because of his race, but because of "the military urgency of the situation."

Three of the justices vigorously dissented from the majority opinion. Justice Robert H. Jackson denied that the government could simply declare all members of a racial group guilty and imprison them. He wrote that "guilt is personal and not inheritable." Justice Owen J. Roberts condemned the imprisonment of a citizen "without evidence or inquiry concerning his loyalty." Justice Frank Murphy called the majority opinion "this legalization of racism." [Korematsu v. United States, 323 U.S. 214 (1944)]

When the Supreme Court made its Korematsu decision, the justices also decided another case that resulted in finally closing down the prison camps. The Supreme Court ruled that President Roosevelt's executive order and the enforcement law passed by Congress only authorized the removal of the Issei and Nisei from military areas, not their imprisonment. The court never squarely decided whether the government could have legally issued orders and passed laws to establish a prison camp system. [Ex parte Endo, 323 U.S. 283 (1944)]

When the Issei and Nisei left the camps, the government granted them $25 per person or $50 per family and train fare home. In 1948, Congress partially compensated them for the loss of their businesses or property.

In 1980, President Carter appointed a special commission to investigate the entire internment affair. The commission concluded that the decisions to remove those of Japanese ancestry to prison camps occurred because of "race prejudice, war hysteria, and a failure of political leadership." In 1988, Congress apologized and granted personal compensation of $20,000 to each surviving prisoner.

Korematsu had one more day in court. Researchers discovered that the government had withheld important facts at his trial. In 1984, a federal judge agreed that Korematsu probably did not get a fair trial and set aside his conviction.

During wartime, the Bill of Rights has often become less important to Americans than the need for national security, as Korematsu found out. The problem in wartime is to achieve what Supreme Court Chief Justice William Rehnquist terms "a proper balance" between civil liberties and protection.

A few months after September 11, Fred Korematsu, then 82, spoke to students at Stanford University. He said that he never lost faith in the American system of justice. "You have to fight for your rights," he declared. "Don't be afraid."

Of Civil Rights and Wrongs: The Fred Korematsu Story From PBS's POV.

The Japanese American Internment Large set of links from About.com.

Evacuation and Internment of San Francisco Japanese, 1942 Museum exhibit with links to newspaper articles of the day.

Teaching With Documents Lesson Plan: Documents and Photographs Related to Japanese Relocation During World War II From the National Arcives and Records Administration.

Was the United States justified in placing Japanese Americans in internment centers in 1942, after war was declared on Japan? A lesson from Project Legal.

War Relocation Authority Camps in Arizona 1942-1946 Photographs of the camps.

Terrorism: A Section by Section Analysis of the USA Patriot Act A CRS Report for Congress. (PDF File)

Reviews of Supreme Court Justice William Rehnquist's All the Laws But One: Civil Liberties in Wartime:

All the Laws But One Interview of Rehnquist by David Gergen on PBS's NewsHour.

The Precarious Strength of Civil Liberties From Christian Science Monitor.

After September 11, 2001, President George W. Bush and Attorney General John Ashcroft took steps to strengthen the ability of law enforcement to investigate terrorist activity in the United States. Congress also passed the "Patriot Act," which gives additional authority to law enforcement. Some of these new measures affect only non-citizens, but others apply to American citizens as well.

Below is a list of measures that are currently in effect. Do they achieve "a proper balance" between civil liberties and protection? Read each one and then write a paragraph, explaining why you agree or disagree with it. After doing this, presents your views on the four measures in a class discussion.