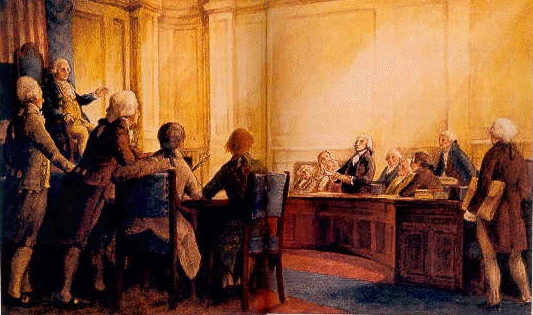 Additional Lessons: From our Catalog

The Virginia Statute for Religious Freedom. Drafted by Thomas Jefferson, this Virginia law served as the model for the religious clauses in the First Amendment. It established a clear separation of church and state and was one of Jefferson’s proudest accomplishments.

John Peter Zenger and the Freedom of the Press. Should someone be prosecuted for criticizing or insulting a government official even if the offending words are the truth? Should a judge or a jury decide the case? These were the key questions argued in the colonial New York trial of John Peter Zenger. The outcome deeply influenced freedom of the press in America.

Wartime and the Bill of Rights: The Korematsu Case. During World War II, the U.S. government ordered 120,000 persons of Japanese ancestry into prison camps. Fred Korematsu, an American citizen of Japanese descent, refused to go, and his case went before the Supreme Court.

Free Press vs. Fair Trial: The Lindbergh Baby Kidnapping Case. Charles Lindbergh was a genuine American hero. He was the first pilot to fly solo across the Atlantic. When his infant son was kidnapped, the trial of the alleged kidnapper developed into a sensational news story. The reaction of the public to this highly publicized crime, and the effects that modern publicity had on the jury, seriously challenged the limits of freedom of the press. The controversies raised by the media coverage of the Lindbergh kidnapping trial still resonate today.

See our full archive of Bill of Rights in Action lessons.

The Trial of John Peter Zenger. This trial in colonial times helped define freedom of press in America.

What Is Your Best Freedom? Students make a poster illustrating their “best freedom.” In preparation, students discuss the freedoms they have as Americans and at school.

DOWNLOAD NOW!!! For only $9.95 each, purchase and download now these PowerPoint presentations (Windows). Using animated graphics, each present content on the U.S. Constitution and guide students through an exciting interactive classroom activity. The accompanying teacher's guide includes taking points to accompany the content presentation, step-by-step teaching prodcedures for the activity, and student handout masters.