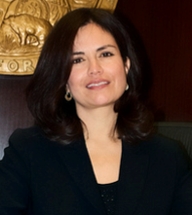 “Mock Trial exposed me to the opportunities that a higher education can provide and allowed me to meet mentors who would change the course of my life. “

Judge Márquez-Britsch’s parents had originally come to the United States as migrant farm workers. They eventually opened a restaurant in Sacramento, where their daughter, Raquel, attended Bishop Manogue High School. In 1983 and 1984, she participated in Mock Trial as a defense attorney. Two local prosecutors coached the team. Her all-girl team won at the county level competition and then competed at the state level where, she says, “for my efforts, I was lucky enough to receive Best Defense Attorney of the Year.” She went on to attend Santa Clara University, and then UCLA Law School. After 20 years of service as a prosecutor, in 2012 she became the first Latina appointed as a judge to the Riverside County Superior Court.

“I am immensely thankful for the Mock Trial Program and Constitutional Rights Foundation,” says Judge Márquez-Britsch. “My siblings and I are the first in our family to have an opportunity to receive an education.”